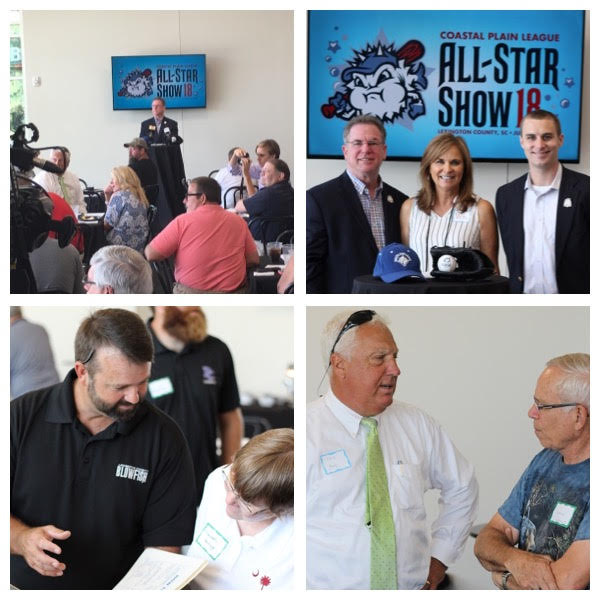 LEXINGTON COUNTY, S.C. – The Coastal Plain League announced today that the 2018 All-Star Show will be hosted by the Lexington County Blowfish on July 8th and 9th 2018 at Lexington County Baseball Stadium in Lexington, South Carolina. The All-Star festivities will begin on Sunday, July 8th,
when the Blowfish host the All-Star Fan Fest. One of the big draws in the past for Fan Fest is that of the Home Run Derby, which gives CPL All-Stars
a chance to battle it out to see who has the most power with the bat.

As part of the “All-Star Show”, immediately before Sunday’s Home Run Derby, there will also be a “mini home run derby” when local media
and celebrities will face off against invited Dixie Youth baseball stars representing all the Lexington County Dixie Youth Leagues. Temporary fences
will be set up past the infield to provide fun and excitement to the contest. Fans will also have the chance to meet both CPL All-Star teams during
that time. The complete list of 2018 All-Star Show events will be announced as it draws closer. The midsummer classic will feature all stars from all
sixteen CPL teams.

On Monday the All-Stars will be treated to a luncheon on Lake Murray before a day that includes Major League scout day activities and then the 20th CPL All-Star Game. Honorary Game Captains will be members of the Lexington County Lady Blowfish Softball 12 & 14U teams.

“It is a great honor to award our All-Star Show to the Lexington County Blowfish for 2018,” said Coastal Plain League COO/Commissioner Justin Sellers.
“This event has grown in popularity each year; attracting fans locally, regionally, and nationally to our host community. Owners Bill and Vicki Shanahan,
GM Brian Larkin, and the Blowfish staff have done a wonderful job in operating the club and being a huge part of the community. I know they are excited
to showcase Lexington County next summer. I am confident that they will create a memorable event for our players, coaches, umpires, and fans!”

‘We are honored to host the 2018 CPL All-Star Show, to showcase Lexington County and believe fans from all over the country are in for two days of great
summer collegiate baseball action and fun!” said Blowfish General Manager Brian Larkin.

“As local owners, my wife Vicki and I are looking forward to being able to represent Lexington and our communities in Lexington County to the elite players,
executives, fans and families who will be attending this event,” commented Blowfish Co-Owner Bill Shanahan.

About the Blowfish
The Blowfish enter their 13th season in the CPL and 4th in Lexington County. This will be the second
CPL all star game hosted by the Blowfish organization. The first was in Columbia in 2007 at Capital City Stadium. The Team was founded in 2006. Players
are recruited from colleges and universities from across the state, region and nation including the USC Gamecocks, Clemson, Coastal Carolina, and more.
For tickets log onto www.blowfishbaseball.com or call 803-254-FISH (3474) or stop by Blowfish on Main, 101 East Main in Lexington.

The Coastal Plain League is the nation’s premier summer collegiate baseball league. Celebrating its 22nd season in 2018, the CPL features 16 teams
playing in Georgia, North Carolina, South Carolina and Virginia. The CPL has had over 1,400 alumni drafted and 107 of those – including 2011 AL MVP
and Cy Young winner Justin Verlander – make their Major League debut; while another notable alum – Russell Wilson – won Super Bowl XLVIII. For more
information on the Coastal Plain League, please visit the league website at www.coastalplain.com and follow
us via Twitter @CPLBaseball.